Clean air to breathe is essential both for humans and the environment. At the same time, one of the defining features of our modern standard of living is our capacity for mobility. However, vehicles with internal combustion engines leave harmful exhaust gases in their wake. Catalytic converters provide the technical response to this problem by converting the gases in a way that greatly reduces the harmful effect on humans and the environment. This conversion process is continuously optimised and monitored.

ERNST premium quality diesel catalytic converters – the benefits to you: 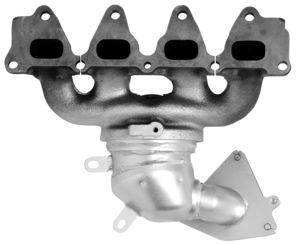 Structure and function of a catalytic converter

A catalytic converter for exhaust gases consists of a catalyst carrier (monolith), the housing and associated connecting pipes, and mounts. The monoliths are coated with a complex substance consisting of various inorganic oxides – the so-called washcoat – and certain noble metals such as platinum, palladium and rhodium.

In petrol engines, three-way catalytic converters are used to convert the pollutants. The name refers to the three chemical processes that take place almost simultaneously as soon as the operating temperature is reached.

The oxidation catalytic converter efficiently oxidises carbon monoxide (CO) and hydrocarbons (HC). However, because the combustion method involves excess air and the lambda (λ) value is therefore greater than 1, the exhaust gas has a high residual oxygen content and it is consequently not possible to reduce the nitrogen oxides (NOx).

By adding ammonia in the form of an exhaust fluid (AdBlue®) to the exhaust system upstream of the SCR catalytic converter, the nitrogen oxides are selectively converted into elementary nitrogen. A conversion rate of up to 90% can be achieved.

Catalytic converters are subject to extreme mechanical and thermal stresses during the catalytic reaction. That is the main reason why the monolith in the ERNST catalytic converters is made from a material that can reliably withstand large fluctuations in temperature, gas pulses and vibrations.

Only a catalytic converter that has the right dimensions for the engine in question and has a suitable noble metal coating ensures a high conversion rate throughout the entire lifetime of the component. ERNST guarantees these premium characteristics for all its catalytic converters.

The mounting, or canning, of the monolith plays a crucial role in reliably preventing the vibration-induced fracturing of the ceramic body. If the metal housing and the mounting mat are optimally adapted to the size of the monolith, then there is no risk of fracturing.

The choice of materials constitutes another premium feature. In the internal structure, we use only high-quality materials. The housing is completely manufactured from stainless steel.

With ERNST catalytic converters, you have a persuasive argument to convince your customers. Tell them about the importance of product quality and the ECE approval number.

How we support you:

Our tip for drivers

When you visit your garage, make sure you ask for an ERNST catalytic converter. Because our premium quality guarantees outstanding reliability during operation.